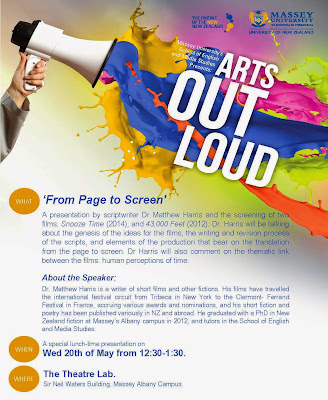 Arts Out Loud Series 2015:
From Page to Screen 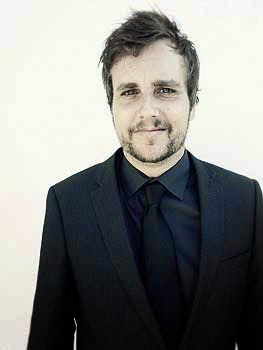 
This is the first this year in our Albany Arts Out Loud series, sponsored by the School of English and Media Studies on Massey's Palmerston North, Wellington, and Albany campuses, and co-hosted here in Auckland by the College of Humanities and Social Sciences.

A presentation by scriptwriter Dr Matthew Harris, and the screening of two films, Snooze Time (2014), and 43000 Feet (2012). Dr. Harris will be talking about the genesis of the ideas for the films, the writing and revision process of the scripts, and elements of the production that bear on the translation from the page to screen. Dr Harris will also comment on the thematic link between the films: human perceptions of time.

Dr Matthew Harris is a writer of short films and other fictions. His films have travelled the international festival circuit from Tribeca in New York to the Clermont-Ferrand Festival in France, accruing various awards and nominations, and his short fiction and poetry has been published variously in NZ and abroad. He graduated with a PhD in New Zealand fiction at Massey’s Albany campus in 2012, and tutors in the School of English and Media Studies. A sample of his work can be found here.


MC for this event: 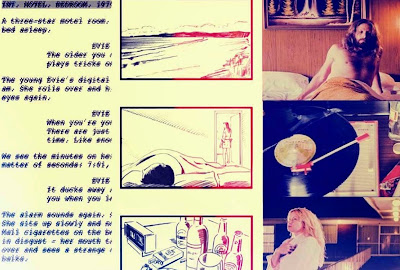 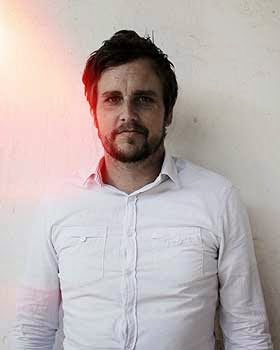 Previously on this campus: